On Wednesday, Feb. 28, we will release two new iterations in our Leaves of Grass series!

This entry in the series was brewed nearly a year ago with barley, wheat, oats and both juice and zest of Meyer lemons. It was fermented and aged in wine barrels, then allowed to bottle condition for several months. Inspired by Farmer Wave, this beer was brewed during our Farmer Wave sessions with Matt Dinges of Good Life Provisions as a prototype for future excursions.

Brewed over two years ago and allowed to age in chardonnay wine barrels for 18 months, this was brewed with barley, oats, wheat, honey and Nelson Sauvin hops, then aged on gooseberries and Northern Kiwi Fruit from our friends at Elmore Roots in Elmore, Vermont. This beer and recipe is based upon a 2006 pilot brew version of a New Zealand inspired beer—which, loosely, would become Juicy.

We will also have fresh cans of Citra Single Hop Pale Ale available! 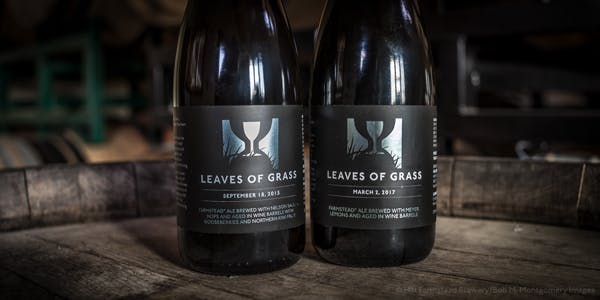