This coming week, we will debut the thirtieth entry in our blended barrel-aged Farmstead® ale compilation. It has been more than nine years since the original release in our Civil Disobedience series, and following 29 iterations in this formative and exploratory series—we reach a milestone with “CD 30.” This release not only transitions to a new, descriptive label design (that customers may find helpful in identifying blend specifics) but also, as you will read below, seems to encapsulate the panoramic potential and possibilities of our bottle conditioning library.

I have been saving this bottle and anticipating its trajectory—revisiting it every 4-6 months. This blend is among my favorites in the last six years, due in part to the noble lineage of some of the barrels. It is composed of beers aged in red and white wine barrels, which formerly held Art, Flora, and (the yet to be released) Double Honey Ann. Blend components include Sankt Hans, Brother Soigné, 90% Wheat base, a Buckwheat base that aligned with the formulation of Samuel, and several barrels of Florence. Bottled in October of 2017, this beer has benefited from its three years of bottle conditioning. The structural integrity and arc of this beer’s conditioning suggests that it will continue to achieve for five to six years. In aroma and complexity—this beer is reminiscent of Civil Disobedience #10– which, to me, was among the greatest of the series.

This series realized its vibratory existence in the Summer of 2011. It was a circumstantial unfolding and the unpredictable byproduct of “extra beer”—beer that was orphaned and alone (like all of us) by either time, space, or process. Helping this liquid achieve purpose and identity became a fixation and provided an avenue for perpetual exploration. This series of releases has gifted an opportunity to engage with the beautifully disparate and potentially lonely liquid that emerges through the singular search for Art, Ann, and Flora. A blend comprised of Cantillon and Art; wine barrel-aged and dry-hopped Susan and double IPA; what would eventually become Clover; and onward to experiments that would result in Self-Reliance, to hand-peeling 1,000 Mangoes, to learning the Do’s and Don’ts of aging beer on citrus and apples—temporary defeats and occasional successes. I am thankful for the playground and support that has been offered by customer appreciation for this series of beers.

As written nine years ago, the description remains steadfastly harrowing: Henry David Thoreau’s moral call to action is a perennial challenge against the contemporary sopor of individual political conscience… “It is not too soon for honest men to rebel and revolutionize.” The irony, plainly expressed, is that alcohol is too often the contributor to this sopor—numbing the helplessness, the hopelessness, that many of us feel in light of the awareness of an oppressive system that we cannot change. However, there IS HOPE for a Critical Pedagogy- a Critical Consciousness.

This beer is meant to provoke thought. To encourage sharing.

To Question. To Act. To Evolve.

Appreciatively and Dutifully Yours, 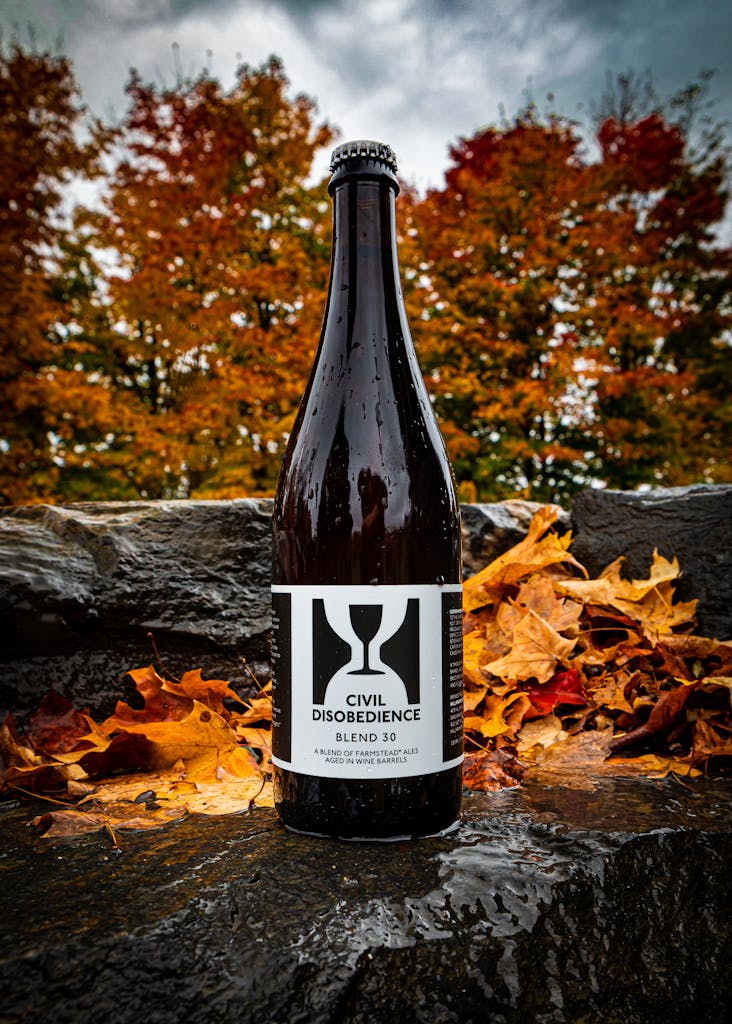