This is likely to be my final writing from my 20 month tenure in Denmark as Head Brewer at both Nørrebro Bryghus and the relaunched Fanø Bryghus. One full week from this expatiation I’ll be moving onward (both forward and backward, in a sense…) – returning to Hill Farmstead with an ever more worldly perspective and, perhaps, a more settled ability to continue the Hill legacy in Greensboro. This generation, however, as a brewer rather than a dairy farmer…

I’m sitting on the island of Fanø, listening to Wilco, and dry hopping my latest IPA. Fanø Bryghus is back on track – our Christmas Porter is receiving great compliments (Chocolate, Coffee, Cinnamon, and Vanilla) – and I suspect that an American Pale Ale will soon be added to the year round catalog. Ryan Witter-Merithew (formerly of Duck-Rabbit Brewery in North Carolina) seems to have settled into life on the island. His ‘Chug” (Chihuahua/Pug mix) “Hamburglar” has been making rounds on the Copenhagen beer scene – and has gained a reputation as a magnetic force to the opposite gender… thus, earning him the nickname “P. Mag.” Multiple visits to the island by Mike Murphy and Michael Jordan over the last month have brought much needed respite from a hectic work schedule and we all attended the Esbjerg beer festival together last weekend.

The fermenters at Nørrebro Bryghus are full of beer in the wake of my departure. Søren Parker Wagner (famed bartender of Lord Nelson and Orsted and creator of Croocked Moon brewing in Denmark) is going to be working part time at Nørrebro in order to keep the gears running smoothly and Rasmus Broge will effectively become the senior brewer at Ryesgade (while maintaining his position at Hedehusene’s production brewery…)

So… what have I left behind at Nørrebro Bryghus? Many beers which, sadly, I’ll never have the pleasure to consume! But, hopefully will be savored by the discriminating palates of the Copenhagen beer scene.
Over the last months, I’ve brewed a beautiful american pale ale called “Hop Something.” 10 kilos of Palisade and Glacier went into the whirlpool of a 1,000L (that’s 264 gallons for the metrically challenged) batch. I have teamed up with the pinnacle of the coffee craft to create two new beers – The Coffee Collective – located on Jægersborggade in Copenhagen: http://www.coffeecollective.dk/). Kasper from CC and I put together a wonderfully subtle beer – 4.8% and full bodied- called Kenya Coffee Stout. The next beer in the coffee series will be a new version of La Granja Stout – brewed with an abundant addition the Coffee Collective’s Guatemalan coffee.

We were joined by Eric Wallace of Left Hand Brewing Company in Colorado on October 17th. Eric shipped over 25kg of hackberry smoked malt (smoked at their brewery!) for our version of a Smoked Baltic Porter. The beer finished out at 7.2% abv, 35 ibus, and has a beautifully smooth and subtle smoke character the compliments the rounded malt character of the beer. This beer should debut sometime around Christmas and is tentatively named Eric’s Smoked Baltic Porter. 200 liters of this limited batch will be aged in an Islay whiskey barrel throughout the winter months and hopefully through next summer… Hopefully someone can carry a sample to the states for Eric and I to taste?

Next week I’ll be brewing an Oatmeal Brown Ale for the draft calendar at Nørrebro as well the new La Granja and a (now not so much of a) surprise “farewell” beer that shall rest nicely in the tanks for a month or two until a gap opens up in the draft list at the pub.

There are also at least 2 new IPAs ahead for Nørrebro. I brewed “Hoppier Something” (though the name is likely to change before it hits the draft lines) – a bigger, hoppier brother to Hop Something – mostly dominated by Simcoe hops.

And, lastly – next Saturday, November 7th, at 4pm, we’ll debut a new Double IPA at Nørrebro Bryghus named Hill Spawn Double IPA. This is my reincarnation of a beer that I brewed at The Shed (in Stowe, VT and the brewery that first gave me creative freedom!) named Hell Spawn. I brewed Hell Spawn back in June of 2006 specifically for the Hop Head Throwdown at the Publick House in Brookline, Massachusetts. My attempt was 220 theoretical ibus and the beer finished out around 10.5% abv. Analyzed, Hell Spawn was 87 ibus. Hill Spawn is a bit more over the top. I wanted 300 theoretical ibus in hopes of breaking the 90+ *real* ibu level – the beer is finished nicely at 10.8% abv and required more than 20kgs of hops for a 900L batch. After dry hopping and kettle loss, I am hoping to keg 500 liters of beer.

On Sunday, November 8th, my last full day in Denmark as a ‘temporary resident’, I’ll go to the Royal Danish Theater, sit in the 4th row, and watch/listen to Wilco play a fantastic set of music. Which will carry me home…

But not without leaving something behind.

For nearly a decade now I have been dreaming of starting my Grassroots Brewery – my original plan was to find a brewing space somewhere in Northern Vermont and conduct brewing operations long enough under the title of Grassroots in order to raise funds to move all operations to Hill Farmstead. At that time, I would have two brands or lines of beer – Grassroots and Hill Farmstead (this was several years before Tomme Arthur launched the Port Brewing/Lost Abbey brands under the same roof). I registered the tradenames, LLC, and bought the domain names for Grassroots Brewery nearly 5 years ago. Now, as I transition into my last days in Denmark – I have finally found a means of starting Grassroots Brewery here on Danish soil.

Last weekend, here in Fanø, I brewed my first American Pale Ale under the Grassroots name – I am contract brewing the beer (for now, myself, and after I leave, Ryan will take the reins) here at Fanø. The focus is American style IPAs, Pale Ales, and hop-forward beers. For now – draft only – and the first batch will be divided between Copenhagen, Sweden, and Italy. The first batch has been effectively pre-sold and tomorrow I’m brewing another 1,000L of this winter pale ale – here in DK – HumleJul (hoppy christmas). Each season will see a different variation on the IPA – whether more flavor forward or bitterness oriented – all beers will be round and elegant – with soft bitterness and flavor forward hop profiles. Look for them on draft in Copenhagen (at the usual beer bars) in about 3 weeks. Beer #1 is a Simcoe forward IPA – 5.5% abv and 120 theoretical ibus and predominantly late hopped. The bitterness is relatively unexpressive and the hop character builds on the aftertaste into a resiny and pleasant linger. It’s quite dry and highly drinkable. Think 3 Floyd’s Alpha King meets Hop Something meets Bell’s Hop Slam…

Grassroots Brewery in Denmark means permanent ties for me in this country – and it will keep me coming back. Anders (Kissmeyer) and I have been steadily entertaining the notion of a yearly guest brew at Nørrebro – laying beers down in oak – and possibly coinciding my visit with the arrival of another American brewer for a three fold collaboration. Alesmith/Hill Farmstead (Grassroots)/Nørrebro, for example? (Damn, this IPA, that I am dry hopping, is almost too pleasant to sip…)
Grassroots is a subsidiary of Hill Farmstead in Vermont – a purposeful connection -in light that my friends and investors can never question my intention and focus…
Look for a sessionable stout in mid-winter and possibly some bottles of the IPA once the bottling line here in Fanø is up and running.

And Hill Farmstead? Almost immediately upon my return, my first weekend home, I am off to Montreal to brew with the crew at Dieu Du Ciel!… The style is still undecided but I can imagine it to be relatively hoppy and abundantly late hopped. As our great friend, and one of the most influential figures on my brewing career and understand of beer – Greg Noonan – passed away several weeks ago – I suspect that Stephane and JF and myself will want to pay some sort of tribute to the man that inspired all of us to brew better beer. In fact, it’s pretty easy to follow the lineage of my brewing education and inspiration: Noonan –> John Kimmich (owner/brewer of The Alchemist, worked for Greg as a brewer for many years…) –> Me.

I’m leaving too many friends behind in Denmark. Every day I am divided – leave/stay… leave/stay… but I must continue to follow my passion and share my experience with the world. Annual returns to DK are certainly in the cards – and the future of Hill Farmstead remains to be written. I’ve assembled a pretty amazing support team to help me launch – between my investors (who may or may not want to be named… yet), my graphic designer, my distributors, my brewing colleagues, friends, family, … We’ll see how it progresses. Worst Case Scenario: I return to Denmark as a brewer and finally attempt to learn the language. Things could be worse, right?

There remains an uphill battle back in Vermont. But I have found my investors, the money, the equipment, and maintain the spirit. Hill Farmstead now… a brewpub in a few years… maybe a longer term return to Denmark…as long as the energy and the consciousness of those involved in this project (that has ever become greater than my microcosmic ‘I’ ) continues to grow and sustain, then I suspect that we can expect further projects to evolve… 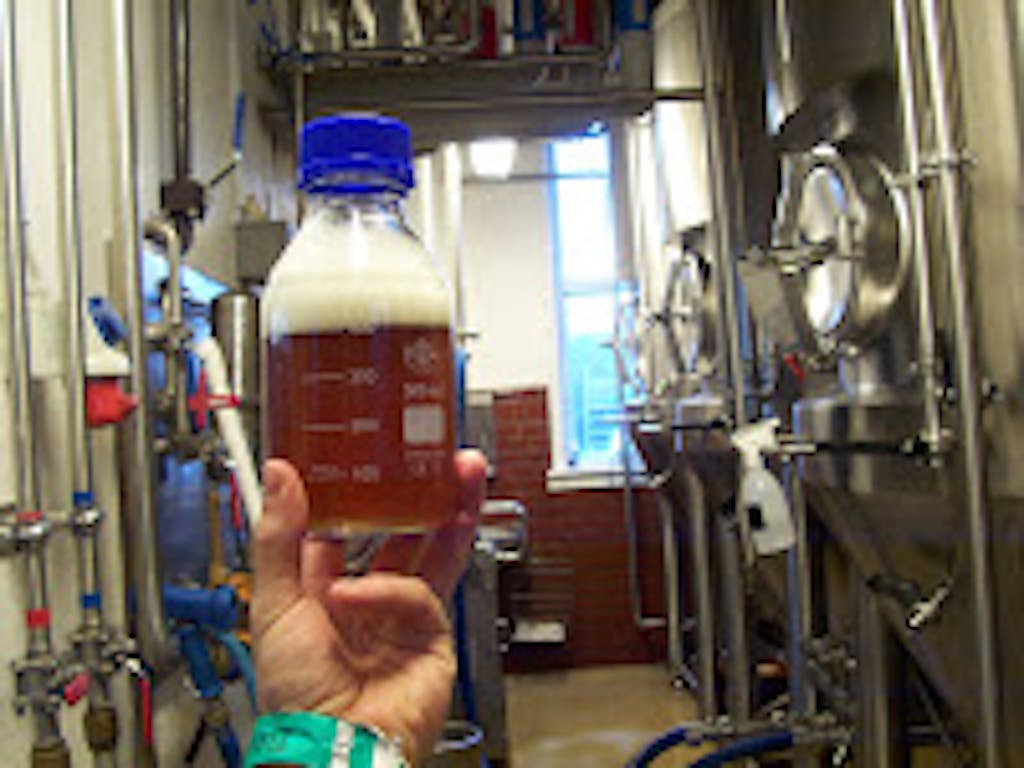 Topics
2 weeks... Into the Wild
A quiet return home…