“Follow your passion, and everything will fall into place…”
Amidst the endless chatter of our minds and the socially constructed world around us – once in a blue moon – the words of close friends, perhaps uttered but once, carry onward in our spirit, become mantras for our individualized revolution. “Follow your passion and everything will fall into place.” Thank you Mateo. Apparently, as all of you may have noticed by now, this passion for launching the brewery has displaced my former fondness for the written word. I vow to you: more blogging. More meandering and rambling. More Hill Farmstead and Shaun e. Hill bullshitting… Well, after all, it shouldn’t be too difficult to write more than once every two months! So… after a pseudo apology and introduction – on with the blog…

Busy as hell. Or heaven. Or life… just plain busy on a daily basis trying to coordinate the falling of things into their place (or, rather, into the place that I think they should go). Two months now since I joined the crew at Dieu Du Ciel and, within those two months, I can finally say that we have ourselves a brewery. Not just the idea of a brewery, the idée fixe that has dominated my being for 10+ years, but a real, tangible, physical manifestation of a brewery – the actual spawn, offspring, of the idée fixe.

By the grace of my brother’s hard worn hands, the brewery building is a virtual work of art. Together, we hand sponged a plastered ceiling in a beautifully haphazard sky blue and readied the woodshed for the spontaneously fermented barrel room. While I’ve been idling many of my days before a computer, orchestrating the purchase of equipment and finalizing permits, Darren has, for example, trimmed out the entrance way to the brewery in 2 inch Cherry – reminiscent of, and no doubt inspired by, our time together in Barcelona and visit to Gaudi’s Casa Mila. Thank you Brother – Couldn’t do any of this without you.

Together, we also finished insulating and readying the mash/lauter tun. The old 10 barrel mash tun from The Alchemist is now outfitted with a manway and, after 14 cans of spray foam insulation, is properly insulated and waiting for production.

In the meantime, I’ve finally reached a conclusion, after weeks of research and deliberation, on the best and most affordable manner with which to heat (“fire”) the kettle. Every week proves a different challenge and learning experience: insurance policies, cooling/glycol chiller, btu requirements, heat loss, ventilation, shipping rates, etc. Thankfully, after many moons and much frustration, I think I have finally assembled a great platform of companies and contacts that I shall continue to draw from over the years. An inordinate amount of time is wasted trying to find great people to work with – these contacts quickly become personable friends and, perhaps most importantly, they share in the enthusiasm for what we are trying to do here in North Greensboro – somehow, I suspect, and as I have written here before, positive energy and vision is infectious (equally, so is negative energy and vision), and creates new levels of consciousness and awareness. Thank you to the support unit!

This last week, alone, has been incredibly rewarding. Shall we recap? For example…
Firstly, and most importantly pertinent to the breadth of the projects at hand, Ryan has brewed the Grassroots Broken Spoke Blackened IPA (no, not a Cascadian Dark Ale!) at Fanø Bryghus in Denmark. 80 ibus of Citra and Centennial hops, dry hopped with the same, and balancing out at 6% alcohol – it just went on dry hops two days ago and should be ready for the draft market in 3 weeks. Some of this should hit Copenhagen around Valentine’s Day and the rest will be shipped to Manuele at Ma Che Siete Venuti A Fa’ in Rome. Speaking of which, Maneule’s pub (see: http://www.football-pub.com) has been named the #1 beer bar in the world by Ratebeer.Com. In celebration, he has informed me that he will be serving liters and liters of Free Grassroots Winter IPA. Wish I could be there!

Also on the Ratebeer.com Radar – Nørrebro Bryghus was ranked as #38 on the list of Best Brewers in the World – up from #68 the year prior (visit http://www.ratebeer.com/RateBeerBest/bestbrewers_012010.asp). My close friends and collaborators Dieu Du Ciel, Mikkeller, and Duck-Rabbit (Ryan’s origin!) all making the top 50 and close friends (and fellow collaborators) Amager Bryghus, BeerHere, and Ølfabrikken all making the top 100. Thus, it is no surprise that our Nørrebro Bryghus SEVEN Niepoort Barrel aged Russian Imperial Stout made the Top 100 beers of the year – as 5 out of the 7 collaborators made the list of the top 100 brewers in the world.

Also, in the last week, Jasper Hill Farm’s Winnimere, which is perhaps one of the most unique cheeses on American soil (no, really!), was featured in All About Beer magazine. This project began nearly 6 years ago, before my tenure at The Shed. The idea being that Mateo and Andy would fashion a cheese that would, in turn, be washed with my beer that had been spontaneously fermented with the micro flora from their cheese caves. Check out the magazine and the article to learn more. There are plenty of beer washed cheeses on the market, but how many of them incorporate the local wild flora of their environment in order to heighten their relationship with the local terrior? (Note: run to the best cheese shops near you and ask for Jasper Hill Farm’s Winnimere…)

In fact, as I sit here writing this, my own batch of spontaneously fermenting wort is bubbling away. Half of it will be used for next year’s Winnimere wash and, ultimately, this experiment is the predecessor of what shall become Hill Farmstead Brewery’s Spontaneously Fermenting Barrel Room. No yeast added to the process – the wort cooled naturally to the Greensboro Air, beneath some maple trees in proximity to the cement ruins of my great grandfather’s barn foundation – 5 days later – these saccharomyces cells have begun the adventure of their lifetime… settling into the most concentrated sugar solution that an airborne yeast cell could ever wish for… imagine their surprise? In exchange, I suspect that they will reward me with fantastic 1, 2, and 3+ year old sour beers… I mean, it couldn’t really happen any other way, could it?

Speaking of barrel aging – the barrel project here is beginning to take shape. Yesterday, 8 Buffalo Trace Bourbon Barrels, that previously housed Sam Adam’s Utopias, arrived on a -20º Fahrenheit, windy Greensboro afternoon. All told, we’ll have sufficient space for 24 oak barrels in the brewery itself – a combination of French and American Oak wine barrels (Cabernet, Zinfandel, and Merlot along with several Chardonnay barrels for a future release of the reincarnation of the Annika Saison – my Sauvignon Blanc inspired beer for people that prefer white wine…). Also, a few Brandy and ice wine barrels will find way into the mix. Also, there is sufficient space for 12 ‘sour’ barrels in the Woodshed and bottle conditioning room. In fact, the woodshed has enough space to house a 400 liter ‘bottling’ tank which will allow us to bottle our sour beers in a safely separate building…
Question: what should we name our spontaneous terrior fermented sour ales? Can’t call it Lambic (and don’t want to), nor Sonambic (a great name created by Brian Hunt and Vinnie Cilurzo)… certainly not Vermambic.

More than a month ago, I prognosticated that Vermont would see the opening of no less than 10 new breweries within the next 2 and a half years. As of this moment, the last weekend of January, I am aware of 4 new breweries opening in 2010! Vermont already supports, per capita, the most breweries in the United States. At which point will the market hit saturation level? I foresee a fall out within the next 2 years – an overwhelmed and bewildered consumer, faced with too many options and highly priced releases, abandons curiosity for convenience. In a battle for shelf space, consumer confidence, and bar draft line availability – will the cream necessarily rise to the top? Or will the ambitious and inexperienced startups, coupled with breweries of the large and overzealous type (those focused on growth, market share, and non sustainability), inadvertently dismantle the Hill Farmstead paradigm: sustainable farmstead brewery, able to cap its production size and growth (quality rather than quantity) in opposition to the confounded american ‘ideal’ of global domination, hell bent upon limitless and boundless growth at the detriment of the environment and our natural resources. To wit: How many breweries can the Colorado River support? When there is a drought warning, do breweries stop producing beer? Doubtful…
The bottom will fall out. Sadly. Where will Hill Farmstead Brewery be when the dust has settled? A Phoenix… ?
Progressive notion for current and future Hill Farmstead investors: Brewpub. Brewpub. Brewpub. The sooner the better.

So, all predications aside (for now), we still move forward, with a seemingly effortless grace…
Most Importantly:
Grand Opening: May 29th, 2010. Beer. Food. Music. We’ll be serving pints and selling beer to go. Some special guest beers on draft, gifts from friends around the globe. Music: Rob Morse and PJ Davidian (two of Vermont’s greatest jazz musicians and long time friends and Hill Farmstead supporters – from the early homebrewing days!) will piece together a trio to entertain the throng of gatherers. It also happens to be open studio weekend in Vermont – and my brother (a truly gifted carpenter and woodworker of some of the finest furniture in the world) will open his shop and his business, Leaning Maples Woodcraft (a true work of art in its entirety), to the public. Jasper Hill Farm cheese, music, food catered by Laura of Parker Pie.
Also – it’s my birthday. Expect a bonfire. And camping. And pray for no rain.

World Beer Cup/Craft Brewer’s Conference, Chicago – April 7th – 10th: I’ll be in Chicago for two nights, along with Mikkel (Mikkeller), Jacob and Morten (Amager Bryghus), and Anders Kissmeyer (Nørrebro) – Anders has entered 7 beers that display some semblance of my fingerprint into the World Beer Cup competition and I’ll be joining him for the awards dinner. Also, thanks to the Shelton Brothers, Hill Farmstead beers should be make an early debut alongside the beers of my Danish brethren in the Chicago beer scene. Following the conference, Anders is intending to join me for Collaboration #1.. I suspect a beer that involves smoked malt…

Publick House, Ebenezers/Lion’s Pride, La Laiteria/Farmstead, and Blind Tiger:
Vermont’s impending market saturation likely indicates the necessity that we abandon our idealized vision of being a “Vermont only brewery.” Thus, by late April or Early May, anyone that may still be reading this blog update (have I bored you, indifferent?) can anticipate debut events at the above mentioned locations. Boston, Maine, Providence, and NYC. I’m still sitting on more than a hundred bottles of the Limited Release beers from my barrel aging project at Nørrebro Bryghus – and those beers will again greet the light of day (poor phrasing, perhaps, given UV impact upon beer!) yet again, at the above locations.

Brew Schedule, as intended as of today…

That’s all for now. Keep the PMA. And always feel free to visit and lend a hand… Cheers from Hill Farmhouse. 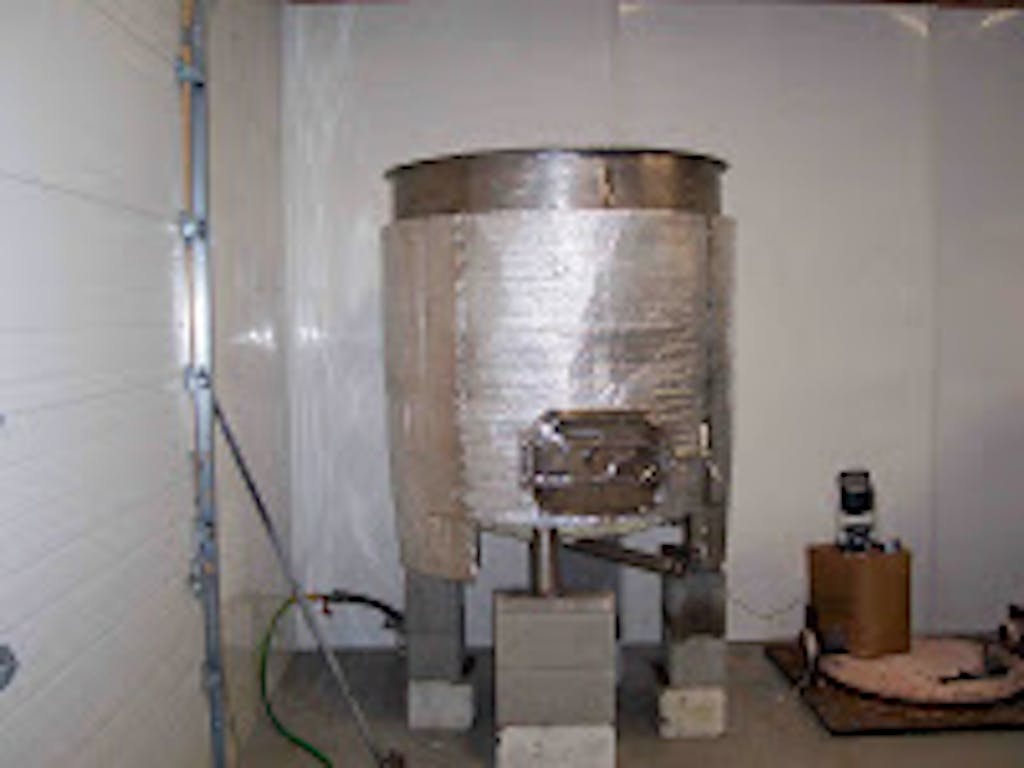