Reflections on the “beginning”…

Good evening folks. I’m finally resting here, Founders Kentucky Breakfast Stout before me, wood fire burning alongside, and trying to manage the multitude of information before me. Stacks of bills and catalogs, books and notes (I’m making ‘to-do’ lists out of ‘to-do’ lists…), and hundreds of photos, designs, videos, and choices to make. As the inaugural brew at any brewery should be a day of mild stress and relative excitement, I thought it best to attempt and share some of the moments, video, and photos from the first four beers and the last few weeks.

Piecing it all together, it grows ever more clear that Hill Farmstead Brewery is genuinely held together by the friendships and relationships, love and optimism, of every individual that comes into contact with the project. For example, without Mike, Darren, and Jim, this project never could have happened.

Also, without Mikkel, Jeppe, Brodrick, Jens, Anders/Marie, Kim, Peter, Alex and so many other believers – we never would have found our footing to build this foundation. Of the four brew days that we’ve had thus far, none has been in solitude – Darren (my brother) and Ben (a best friend from my high school days) have been present to assist every day – while my parents drop by to say hello. My neighbor Jim (who plumbed my entire cooling and water system) hasn’t missed a chance to observe the process – but, we’ve also been greeted by many guests and gifts. For example, a box of beer happened to have arrived from Utah on the very morning of my first brew day… planned, as it were, perfectly, by the sender. Mike Ingrassia, who will help sell our beers in the Phiadelphia area, visited last weekend and helped us smoke malt and relax for a few moments; Anders Kissmeyer (my great friend and former boss in Denmark) has been here for the last 5 days; Paul Sayler (American Flatbread Burlington Hearth) came out to help us brew the Smoked Baltic Porter yesterday; Dan Suarez, who happens to be a brewer at Sixpoint Brewery in Brooklyn, visited us for several days during the planning of our first brew.

(That’s Anders smoking the malt for the Porter… )

Here is a poor quality video of Dan Suarez and I during our very late preparations, the night before the first brew:

And here is a poor quality video of the first brew day:

And the visits, and friendships and support, haven’t stopped. Mitch Steele is coming through, while researching for he and Steve Wagner’s “IPA book” and we’re discussing an unofficial Black IPA collaboration. In Denmark, Ryan is hammering out the details of a Cigar City collaboration while we also finalize the details of a special Grassroots/Mikkeller collab for the Italian beer market. Our Grassroots Citra IPA and Double IPA will hit Copenhagen and Italy within the coming weeks. I’m also working on the details of the sour barrel project with Chad Yakobson (http://brettanomyces.wordpress.com/) and should begin brewing the first of that release series by next weekend. Glass companies (Thanks to Lorri of Saxco and Richard from United) are pooling incredible efforts. Søren Varming (Punktum Designs in Copenhagen: http://www.punktumdesign.dk/) has finished up the label and logo design – which we will unveil in the coming days – and Alex has manipulated it all into keg collars, t-shirts, and glassware designs. HoldFast Designs (http://www.facebook.com/pages/Hardwick-VT/Hold-Fast-Designs/122147006763) should have our shirts available within the coming weeks. Sigh. Endless, isn’t it?

The Bird’s Eye Maple Smoked Baltic Porter (smoked with our very own maple – courtesy of Darren) is fermenting away – happy lager yeast loving the sugary wort. Anders has just left me, returning to Boston, probably wreaking of maple smoke, where he will find a flight home to DK on Sunday. No doubt he is still flying high from our gold and silver medal wins in the World Beer Cup.

Amazing, really. To have crafted the best American style Imperial Stout and American Style Barleywine (both aged in Niepoort barrels )- in the same competition? When was the last time that this happened at a beer competition? When I realized the project that would come to be known as SEVEN – the goal was to pool together the best ‘dark beer’ brewers in DK and craft the perfect Russian Imperial Stout. Imagine that… and a Silver medal for the Viking Oud Bruin in the American Sour Ale category? Again, this is all so elating and unreal – that the barrel aged series of beers that I crafted while in Denmark would take 3 medals in the largest beer competition in the world. Kissmeyer and I raised our glasses several times in disbelief… Wow. Street credit, I reckon… and not such bad timing, either – just one week before releasing the first beer from Hill Farmstead.

The first batch of IPA will hit the streets of Vermont on April 20th (yes, 4/20!) – I highly encourage you to seek it out at better beer establishments. I’m very happy with the first batch produced from this brewhouse – soft, elegant, rounded – the result of our well’s water and a great hop profile and yeast strain. It’s 5.5% abv and hovering in the 85 ibu range. Draft only for now – Edward India Pale Ale (in honor of my grandfather) is our flagship and likely to be our only true year round beer. The Imperial India Pale Ale will be released and will likely debut, in triple dry hopped fashion (twice in the fermenter, once in the cask) at the Three Penny Taproom’s Montbeerlier, first anniversary event (http://www.threepennytaproom.com/blog/?p=223). 8% abv, 170 theoretical ibus – Abner Imperial India Pale Ale (in honor of my great grandfather) will only be produced, in very limited quantities, several times a year. Frankly, the massive amounts of hops used to produce this beer (in the range of 70 pounds worth of hops for a 220 gallon batch of beer) prove difficult during clean up. I can only imagine what the brewhouse will look like after crafting Ephraim Imperial India Pale Ale (a triple ipa brewed in honor of my great great grandfather)… Anyway, check out Abner around the first week of May or come and fill up a growler at our brewery. The retail shop opens on May 1st and, karma-willing, we’ll have growlers to fill with both Edward and Abner… along with glassware and t-shirts.

That’s all for now folks. I’ll leave you with a little information about our forthcoming summer events:

May 29: Our grand opening. Please email me for details. Camping is available but please email ahead – it would be great to have a general idea of how many people will be attending/staying throughout the evening/morning. This is shaping up to be several times larger than the Backwoods Brewdown… Deep Breath. Hope we have enough beer, t-shirts, and glassware for the event. Shaun(at)HillFarmstead.Com or call 802 533 7450.

June 4/5: Philly Beer Week. Jeff Norman has invited us back to Kennett Square (after 2 epic years of participating in the Kennett Square Beer Festival and debuting beers like Annika and Hell Spawn…) and we’ll be hosting a special event on Friday Night at the Kennett Flash (http://www.historickennettsquare.com/beers-on-broad.html). At my request, this will be catered by one of my favorite food establishments, Talula’s Table. On Saturday, we’ll be participating in the Festival itself – bringing along the usual family members, Edward and Abner, as well as Arthur (my grandfather’s brother) Farmhouse Saison, and, all too likely, either an early preview of the Smoked Baltic Porter or our Black IPA… or maybe neither… or maybe Both… ? Hmm.

June 18/19: BeerAdvocate’s American Craft Beer Festival. If the Alstrom Brothers invite us down to Boston (http://beeradvocate.com/acbf/) , we’ll be pouring beers for the weekend and likely doing something special at either Deep Ellum or the Publick House.

Goodnight Folks. And thank you for supporting our vision.
Shaun e. 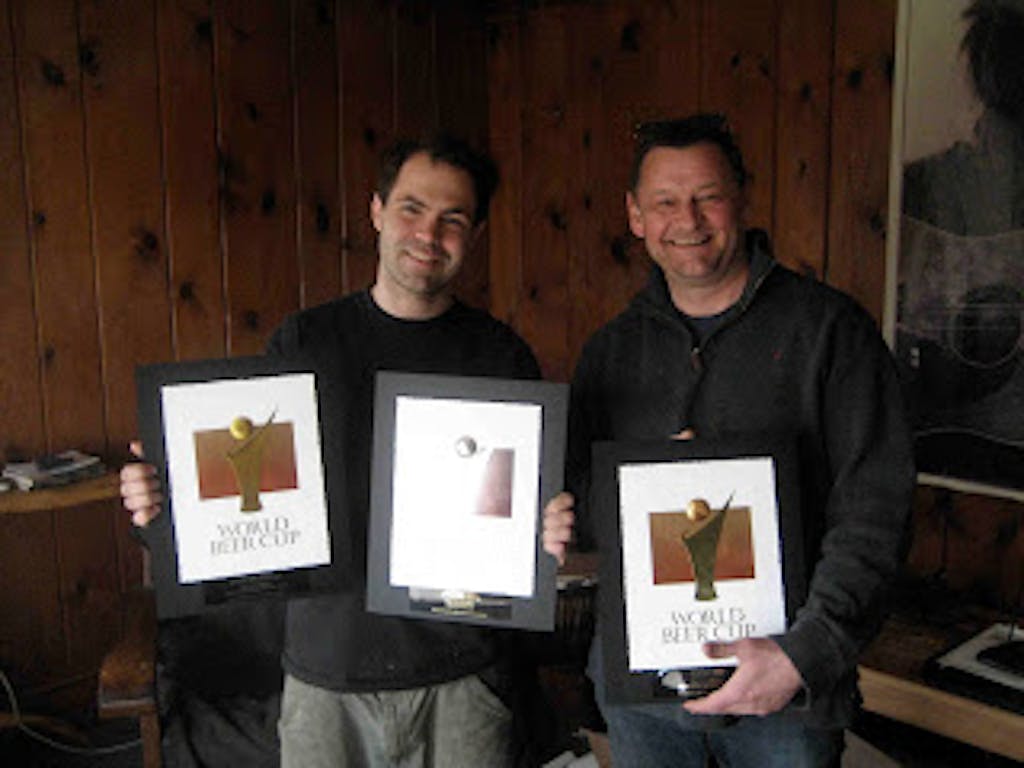